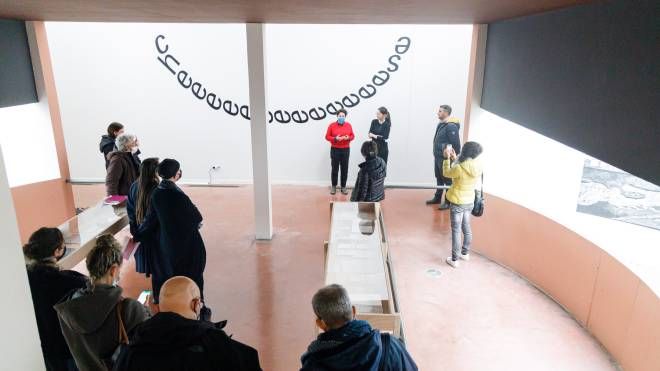 Bologna, May 11th, 2022 – The review of City of Art 2022. The cultural alliance project started on May 7th and now in its tenth edition, it was born from the collaboration between Municipality of Bologna e BolognaFiere to support the annual performance of with exhibitions, events and special initiatives art fair and propose an original exploration of museums and art sites in the city.

The main core of Art City Bologna consists of a main program articulated in one Special Project and in a series of curatorial projects from the most diverse contemporary artistic practices.
In this edition, too, the action contexts range from a wide variety of typologies: from symbolic places par excellence of civic history such as e.g Piazza Maggiore, Palazzo d’Accursio and the National Picture Gallery of Bologna, to palaces of great value that become cultural containers, to a valuable architectural treasure like the Pavilion de l’Esprit Nouveau designed by Le Corbusier, to the green treasure chest of the university museum system located in the heart of the university campus, like the Botanical Garden and the herbarium. The 2022 edition also features a broader and polycentric dimension, expanding the widespread constellation of events towards the greater Bologna area.

Benni Bosetto, Stultifera
May 12, 2022
National Picture Gallery of Bologna | Hall of Wanderers | via delle BelleArti 56
Performance by Caterina Molteni
Stultifera is a magnificent performative work conceived by Benni Bosetto on the occasion of ART CITY Bologna 2022 and will be housed in the Salone degli Incamminati of the National Art Gallery of Bologna. The work takes up the theme of Sebastian Brant’s Ship of Fools, a satire published in 1494, which overcomes its moral criticism and instead reflects on the potential of the ‘madman’, on his fearlessness and thus on the generative dynamics inherent in this instinct.

Emergency Break is a 16mm film installation presenting the Lithuanian artist’s trilogy dedicated to the theme of rescue. Cyprus Dubauskas developed from 2019 and whose last chapter will be realized in Bologna.
The two films 36 Chambers (3′, 2019) and Daynighting (9′, 2020), unreleased in Italy, on view at the Sala Tassinari of the Foundation for Urban Innovation, serve as preludes to the film collage Firestarter, presented in the space Urban Innovation Lab (Salaborsa, Bramante Corridor), in anticipation of the new production that the artist will carry out in the city, starting from a research phase already started thanks to the collaboration with the Lithuanian Cultural Institute and the artist residency Sandra Natali.

May 11-15, 2022
Oratory of San Filippo Neri | via Manzoni 5
Site-specific installation by Maura Pozzati
The exhibition plan designed by Carlos Garaicoa for the history and memory space of the Oratory of San Filippo Neri reflects the themes dear to the artist, such as the exploration of urban and architectural space, which has always been a key to access to delve deeper into the work of the Cuban artist.

Thursday 12 May 10:30 a.m
ARTALK CITY. Mattia Pajè talks to Giovanni Rendina and Guido Molinari
Academy of Fine Arts Bologna, Aula Magna | via delle BelleArti 54
Fuori Terra is a sculptural group of humanoid figures embedded in an installation environment. The sculptures, modeled in bicomponent resin, are organized to form different anecdotal elements that can be read as a cosmogony that the artist has created starting from two visual alphabets: the New Age aesthetic and that of commercial television.
The exhibition developed from the artist’s interest in the concept of truth.

Italo Zuffi, front and back
May 12 – 29, 2022
Banca di Bologna conference hall | Palazzo De’ Toschi, Piazza Minghetti 4 / d. Personal exhibition curated by Lorenzo Balbi and Davide Ferri.
The exhibition, curated by Lorenzo Balbi and Davide Ferri, is in chronological and conceptual continuity with that running at MAMbo to form a single project divided into two spaces: when the first part reviews Zuffi’s work (through a spectrum of work between the mid-1990s and 2020) at Palazzo De’ Toschi, a series of new productions touches on some of the key aspects of his recent research. This passing of the baton ensures that the exhibition proposal of the two rooms focuses entirely on an Italian artist, one of the most important of those born in the late 1960s, and thus allows his work to be explored 360 degrees.